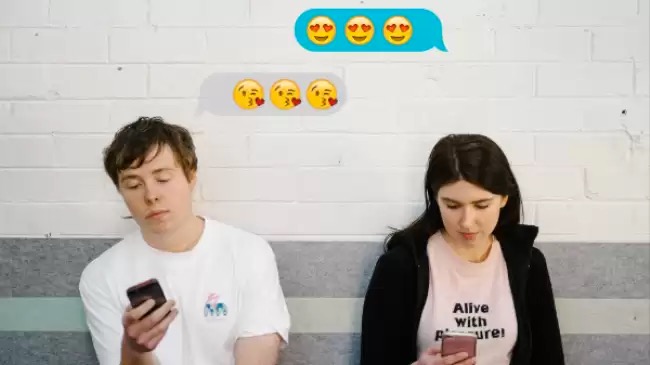 I had a Tinder once. It was never a fruitful app to me—it was mainly used on boring Friday nights when my friends would swipe right on someone as a dare and I was forced to keep up a conversation with them until the next morning.

It was messed up, it was childish. Yet, it wasn’t any different from the other conversations I had from other matches. Discarded. Forgotten. Abandoned or left on read.

I sometimes ask my friends to this day why they still even have their Tinders, their Bumbles, their Grindrs. The names sound like they’re not even trying to be taken seriously. Bumble your way into this half-assed conversation. Ooooh, leave her on read when she’s not interested in anything other than a relationship…how Tinder. Because the word Grindr is a perfect word for a gay man’s dating app.

There’s the argument that these dating apps help us find our soulmates—and some have. A swipe of a thumb leads you to several dating prospects at your beck and call, validating your existence if only for a few messages back and forth. Maybe end up in a relationship, maybe ghosted.

Ghosting: Disappearing without warning because you have no interest in the other person

Breadcrumbing: constant bouts of flirtatious messages or “check ins” with absolutely zero interest, however you or the other person for whatever reason doesn’t want to break it off completely.

Catfishing: Mmm. Why does this still happen? You know very well that is not Lance Bass you’re talking to.

Cuffing Season: A specific time of the year for immature men and women to shack up for apparently the mere purpose of it being cold outside and they “need someone to keep them from the loneliness of the cold winter months?” Are we Neanderthals? This sounds so primitive and shallow, I cannot believe it’s actually a thing. Not to mention how upset I am that it’s deemed as African-American vernacular.

Netflix and Chill: For some reason, apparently when you turn on Netflix, sex happens. I’m not sure where the Chill comes from because there is none in this definition.

These are cute and funny when laughing about your friend’s stories of ignoring Scott the Juicehead who can’t understand that she doesn’t think going to the gym is considered a date, so maybe ignoring him will give him “a clue.” Or comforting your friend who was completely ghosted on a dinner date and didn’t realize until the food was eaten and Katie didn’t come back from the bathroom.

These types of stories are real—they’re made into funny little memes or tweets or Instagram posts for us to take even less seriously than we do relationships nowadays.

The problem with dating apps now is that they’re making it too easy for us to bail, too numb to one another’s feelings. Instead of having to tell Alexis that you’re not really that interested in her, you can just stop answering her messages. Instead of having to see Aaron’s face when you tell him that you see no future with him, you can just string him along with vague responses until he “gets the point.”

It’s made us cowards and it’s made the bond that held relationships together plastic.

Because on top of using your phone or your messages (or lack thereof) to do the “dirty” work for you, it can also be used to enter several relationships or “situationships” at once. With a click of a button. My friend, Asia, puts it this way….

“I think now dating apps def cater to hookup culture and make it so much easier to find willing hookups. You literally can swipe on someone at 8 AM and screw them by 8 PM, especially because the apps themselves have connotations. I mean, we have all heard that Tinder is the hookup app, Bumble is basically “Greek Life Meets,” and Match is “I’m 30 and need love.” so on and so forth.”

And if one person isn’t willing to hook up, there’s others waiting right behind him or her to take their place. WITH A THUMB SWIPE. Before, you had to be bold enough to even insinuate that that’s the direction you’re going in. Now, your thumb does that for you.

Why would you even consider being with one person when there’s so much more out there (insert sarcastic tone)? Why even bother with the emotional work you have to put in to make a monogamous relationship work when it’s so easy to throw it away and move on?

A lot of people don’t want to work through monogamy. It’s hard, they say. Relationships aren’t butterflies and roses all the time. They get boring, they become routine, arguments happen. I see monogamy as being selfless. Why? Because you’re spending your time and/or life with someone else. It’s a partnership. You work together to make things work, through the good and the bad. But being selfless is a trait that our generation seems to have trouble dealing with.

Millennials. We live in the fast lane of selfishness, defined as the selfie loving, look at me look at me, let’s take a picture to prove we’re having fun, fashion snorting, social babes. Who are used to getting things the way they want quickly and without fuss.

Don’t know what I mean?

Download Postmates. Hungry at 1 am? Food delivered within the hour.

Don’t have a car but need to go somewhere? Chris from Uber at your door in 5 minutes.

Needing validation? Upload a picture on Insta, several likes and comments that yes, you are all that and a bag of chips.

From the words of someone who uses dating apps:

“I think they hurt society….they take away from basic conversation skills, they speed up the process of getting to know someone. Our society is already extremely fast paced, and an app can speed up finding if you like/dislike someone. It gives you the opportunity to pretty much have preliminary rounds to knock out those you might not be interested in.”

It can be so easy to scoff at the fact that technology has made our day-to-day lives easier in the form of food or transportation or movies, etc., etc. To see it as beneficial. But if we’re so used to getting things easily, what’s the point in trying harder at something that takes more work than using your fingers and some half-assed conversation?

People say they want a relationship. They’ll proclaim to anyone who will listen their idea of #relationshipgoals –in the form of adorable pictures or intimate videos uploaded on social media.

But we don’t seem to want to work for #relationshipgoals beyond the pictures. The nights where you can’t seem to come to an agreement on a big decision. The days where you’re disgusted with your significant other and want nothing to do with them. The effort into being there for one another when the other is down or not themselves or upset.

Nah, why would you? Brittany and Chelsea and Sydni are waiting for you to answer if you want to come over tonight.

Property of Alex McKay; Unauthorized use and/or duplication of the original material without express and written permission from this site’s author and/or owner is strictly prohibited. Excerpts and links may be used, provided that full and clear credit is given to Alex McKay and/or www.patchworkvibes.com with appropriate and specific direction to the original content.
%d bloggers like this: